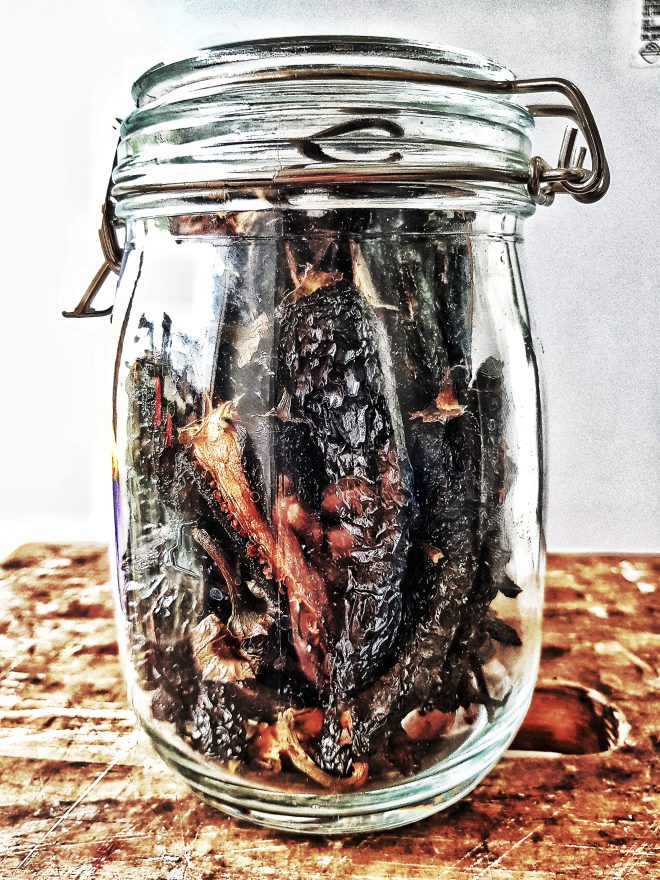 Chipotles are dried and smoked jalapeno peppers whilst adobo is a tangy sauce (it could probably be classed as a pickle) made with vinegar, tomato, sugar, herbs and spices as well as some of the chipotle which are cooked in the liquor. You can use the chillies or the sauce or both in your cooking to add a little smokey and gentle spice to your food.

Quite a few of my recipes include chipotle because it is a flavour and chilli hit that I love. I can include it in meals for the children as well as it isn’t too spicy when used sparingly, it’s a good introduction to spice for them. Add to a chilli, use in fajita, taco and quesadilla fillings, in refried beans, add to mayo/yoghurt for a slaw, use it to marinade chicken or beef, stir into a bean soup, stir through cream cheese to use as a dip…

You can buy chipotle en adobo online or from specialist shops. Often it comes in a can, though, if you’re into pickling and have some time, it’s easy enough to make your own. I use a Thomasina Miers recipe, making just half the recipe and it yields masses, which stores for a long time in a Kilner jar – store in the fridge once opened (my last batch has served me well for the last two years). If you buy it in a can, store anything you don’t use in an airtight container or sterilised jar in the fridge or you could freeze in ice cube trays.

What could you use instead? You could use a chipotle chilli sauce, larger supermarkets and delis tend have extensive ranges of chilli sauces now. I would also recommend Gran Luchito chipotle chilli paste which is also available in some supermarkets and online (not an ad, I genuinely enjoy the stuff and buy it). These sauces tend to be spicier than the chipotle en adobo though so be sure to try them out before dolloping into the food for your children!