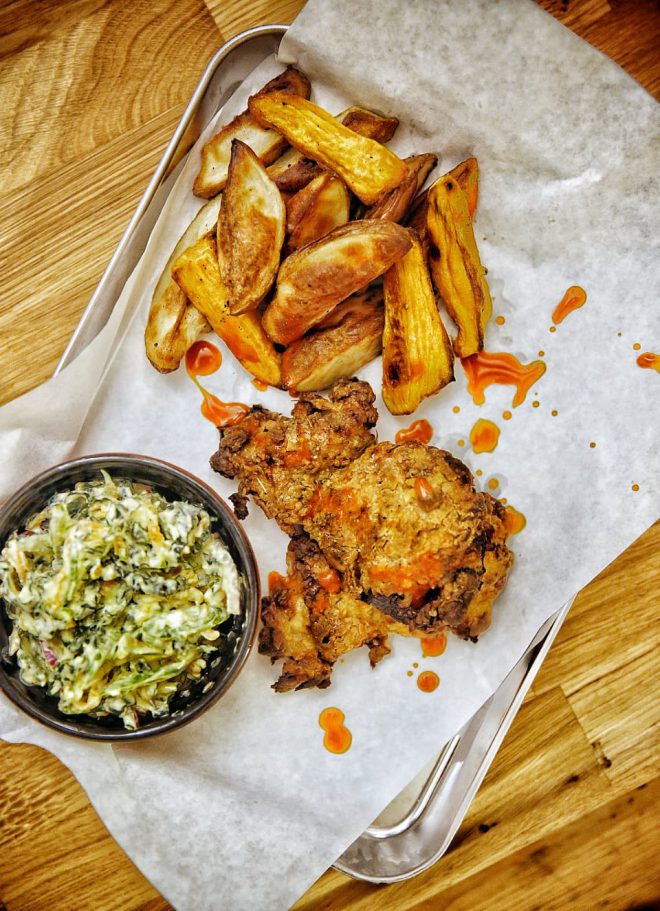 I’m rather partial to Southern fried chicken. The crispy, spicy coating and tender, juicy chicken, when done well, is irresistible. But, until recently, it isn’t something I’ve cooked at home as I don’t tend to deep fry and I thought it was a bit too much effort for an evening meal.

After trying a number of shop-bought versions to satisfy my occasional cravings, I found a good option in M&S food, but lately have found it just isn’t as good as it was.

Then I came across a recipe from Tom Kerridge’s Lose Weight for Good for Southern ‘fried’ chicken which looked the part and, just as importantly, achievable. The fact that it’s a healthier version is a bonus.

The recipe uses chicken thighs to ensure the tastiest and juiciest meat, the skin is removed so there’s no rubbery fat layer under the crispy coating, it takes a few minutes to prepare then is left to marinate for a while before being cooked in the oven. Having the oven at its hottest setting is crucial for getting the crisp coating.

I’ve found another excellent recipe that needs no changing, though, if you can’t find buttermilk, or you want to make this without taking a trip to the shop, you can use milk with a few drops of lemon instead.

The potato salad in the recipe is also delicious, but we like to have ours with potato wedges and slaw.

And, by the way, celeriac steaks make for an excellent vegetarian alternative, though breadcrumbs work better than the flour coating in this case. Cut a slice of celeriac about an inch thick, marinate as per the chicken recipe, then coat in breadcrumbs and bake in the oven at 160c fan for around an hour. Or why not try making this with cauliflower?