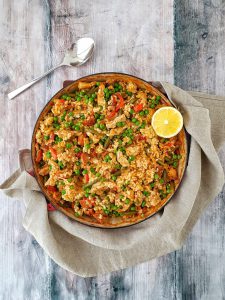 We call this paella at home but as it isn’t authentic, I feel like a fraud calling it that in public and wouldn’t want to face a backlash akin to that launched on Jamie Oliver. So, this is my Spanish-style rice in which I include chicken and chorizo as well as prawns and/or squid when feeling more extravagant.

If you buy the rice in the supermarket, there is often an own brand of paella rice. Buying from an independent shop, you need to look for Calasparra or Bomba rice.