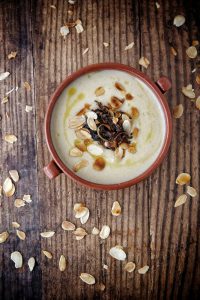 Cauliflower isn’t a vegetable we eat often. I find that it can be too bitter and I’m very rarely inspired to cook with it – except in that winter staple cauliflower cheese (when I have to admit to combining it with broccoli and dousing it in blue cheese sauce to mask the flavour) and Ottolenghi’s delicious cauliflower and cumin fritters with lime yoghurt. So, what to do with the cauliflower that came in the veg box we were trying out?

We fancied soup and I was feeling in a Spanish mood. So, instead of potatoes to thicken the soup, I chose rice and almonds. And to help make the soup creamy (as well as reduce the bitterness of the cauliflower), without going out to buy cream, I cooked the soup in milk and stock.

I used olive oil, caramelised onions and toasted almonds to garnish the soup. Some fried cubes of chorizo would also be delicious.

1 tbsp olive oil plus extra for the garnish

2 onions, 1 roughly chopped and the other thinly sliced

50g flaked almonds plus a few extra for the garnish