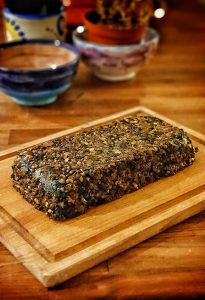 If you want to make this nut loaf look really special, you could remove the stalks from three leaves of cavalo nero, steam them in a little water until pliable, dry on kitchen towel and then use them to line the base and sides of the tin before packing in the mixture. Fold the ends of the leaves over the top of the loaf mixture.