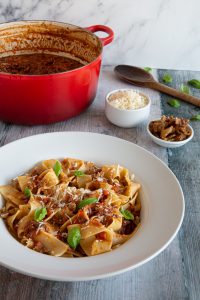 Bolognese is a hit in our house, as it is in many across the UK, but sometimes it’s nice to ring the changes.

Slow cooking duck legs in a tomato-based sauce until it is so tender that it falls off the bones and shreds easily, is a wonderful way of achieving a flavour-packed ragu to serve with pasta.

Unlike duck breasts, duck legs are usually relatively inexpensive and two legs can go a very long way in the sauce. Cooking them on the bones means you’re getting instant flavour going into your sauce.

Duck can be fatty so to save that going into the sauce, I skin the legs before cooking. But waste not want not, the skin can go in the oven at the same time as the sauce – it turns golden and crispy like crackling – and can be served crumbled over the top of your dish to add a surprising crunch in some mouthfuls.