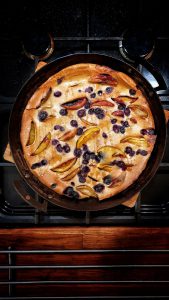 This apple and blueberry toad in the hole was born from my craving for toad in the hole and having no sausages in the house coinciding with the children asking for a sweet pudding! What I did have was some apples past their best and some blueberries knocking about in the freezer, as there often are!

Clafoutis is a traditional French dish akin to this dessert, though the batter for a clafoutis is eggier, more of a set custard. A Dutch baby might also be comparable, a giant fluffy pancake served in a cast iron pan which you might eat with bacon and maple syrup or some berries.

But there’s nothing like the satisfaction derived from a Yorkshire pudding batter with its perfect balance of crisp and airy! Serve straight from the oven with a drizzle of maple syrup and cream.